Spooky, Scary, Standardized Testing: Anxiety around College Entry Exams and How to Deal with it

October – a time for dressing up in costumes, loads of candy, and for most high school students, the scary onset of standardized testing season. For many ACT/SAT test-takers, this stretch between October and January (something I’ve coined college crunch time, is arguably the spookiest time of year…and not just because of Halloween.

In the past, standardized exams have been framed as the end-all-be-all for college entrance. Despite admissions offices putting less of an emphasis on test scores in a post-COVID world, conventional wisdom around the importance of these tests still prevails among most families. And, even though research shows that standardized tests are merely a snapshot of a student’s knowledge at the time of their exam and hold no predictive validity to indicate their future potential to learn, they’re still considered to be a gauge for how successful a student will be at a university.

Take it from me – as someone who started my SAT/ACT journey as an unconfident, self-proclaimed “bad test-taker” and has since become an ACT tutor – that it is possible to overcome these fears. For a long time, I was my own worst enemy – I believed I was born a bad test taker, and that was it…no if’s, and’s, or but’s about it. During practice ACT’s, I’d freeze up mid-way through the dreaded math section, throw my hands in the air, and wonder how I would ever get through a real exam.

I only saw a positive shift in my practice scores when I changed my mindset completely. In reality, no amount of geometry, statistics, or probability practice problems could help without changing my mindset. The SAT/ACT is designed to draw on the material you’ve been learning in your school’s curriculum; you know the concepts, and you know how to identify which problem-solving skills apply where. At that point, the biggest obstacle is self-doubt.

This mindset shift could look like a host of self-care and confidence-building exercises. Before taking a test, practice positive self-talk – for instance, repeat the phrase “I am worthy and knowledgeable” five times. Or, instead of scrambling to memorize a formula in the five minutes leading up to your exam, take that time to perform some deep-breathing exercises instead and calm your heart rate. Sleep early the night before, eat a hearty breakfast, and above all, maintain perspective and know your limits. Standardized tests are not the end-all-be-all, and treating them as such harms your long-term physical and emotional health. Listen to your body and mind – if you feel it’s time to put away the textbook and turn off the graphing calculator, respect that your body is signaling a break.

My biggest advice for SAT/ACT season is this: success happens at the speed of self-confidence!

ConnectPrep is a member of the National Association for College Admission Counseling and subscribes to its high standards of integrity and professional practices to better serve our students. 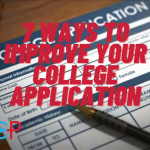 Top 7 Ways to Make You Stand Out on Your College ApplicationCollege Admissions, Student Tips

If the Shoe Fits: Things to Consider when Choosing a College that’s Right for YouCollege Admissions